The Benefits of Dining at Independent Restaurants vs. Chain Restaurants 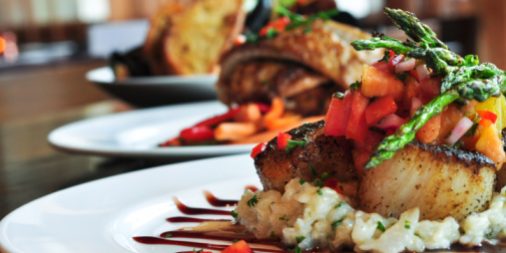 There are reportedly over 660,000 chain restaurants in the United States. That’s thousands of quick and full-service dining locations to feed the whole family for probably no more than $40 total. You must admit, when you are just getting home from the office and the kids are screaming while the hunger pains roll through your belly, it’s not a hard sell to pack everyone in the car to head to the nearest Chili’s. The younger ones can mosh on the chicken crispers while you munch on a decent grilled chicken salad, hoping to qualify for the 2 entrees for $25 deal.

Despite being convenient and lighter on the wallet, there are greater benefits to dining at an independent restaurant rather than the go-to chain establishments television advertising is often boasting about. Before reaching for the carry-out menu from TGI Fridays, consider these pros below of why you are better off making reservations at an independently-owned restaurant.

If you could be a fly on the wall in a quick-service restaurant kitchen (gross analogy, but you get where I’m going with this) you may be surprised how much of the food is prepared hours earlier than it is ordered. A former Applebee’s manager disclosed in an article to PopSugar a couple of years back that all food at the popular food-service staple is prepped in the morning for the day and then heated up in the microwave upon serving. On the contrary, the chef at the mom and pop indie restaurant down the street will begin preparing an order as soon as it hits the kitchen. It may take an extra few minutes to get back to you but it’s because each dish is cared for individually with the customers preferences in mind. The ingredients are fresh, and produce is sourced by local farmers. Another plus to dining independently-owned, is the recipes are often homemade. Yes, that meaty tomato sauce drizzled over your pasta dish was probably first formulated years ago from the owner’s great great grandmother and passed down for generations, only to end up satisfying your craving of true authentic Italian food. Can’t beat Grandma’s home cooking.

While individually run establishments generally have one or two owners who focus all their energy on their business, chain restaurants are regulated by a parent organization. For example, Darden Restaurants is a multi-brand operator of several well-known favorites including Olive Garden, LongHorn Steakhouse, and Bahama Breeze. This makes the dining experience more impersonal as opposed to a single operated eatery that can deliver a more unique offering. Have you ever had a restaurant owner approach your table after the food is served to see if everything came out to your liking? It shows that they want to make the customer’s experience as enjoyable as possible and that they have a hands-on concept to the way things are managed. I’ve even seen the chef make an appearance in the dining room upon request from a guest just to be praised for their creative spin on a traditional mac ‘n cheese dish – which can’t be recreated at home, believe me, I’ve tried.

If you have ever been to a privately-owned restaurant, you probably have experienced how nice and friendly the staff and patrons are right when you walk in the door. After all, first impression counts big for these businesses whose guests have probably never heard of them before. There are plenty of Red Robin’s and Cheesecake Factory’s around to compare how a meal and service is going to turn out, but less well-known restaurants usually get one shot to impress. The hostess will often open doors for you and a drink menu may fall into your hands while you’re waiting for your table to clear. I recently had a conversation with a bartender about our favorite kinds of dogs while swapping pictures on our cell phones of our own pets as he refilled my beer and retrieved my order of a gourmet grilled cheese sandwich. I was equally as impressed with the sandwich as I was with the pleasant conversation that came along with my meal.

While Joe’s Crab Shack may seem like the viable option one night as you’ve already passed three of them on your way to your carpool pickup, the levels of satisfaction that you can get from an independent restaurant can’t be beat. For your next dinner outing, think of the last time you had a juicy steak that you couldn’t wait to praise about to your friends. Chances are, it was probably at an independently-owned restaurant served with fresh greens, delivered straight to your table by the owner or chef himself. Haven’t experienced this yet? Make a reservation at the latest five-star reviewed eatery you’ve seen on Yelp… I dare you.

About the Contributing Author: Joseph Denker is a Licensed NJ Real Estate Salesperson at Bielat Santore & Company. His primary territories include Middlesex and Somerset counties.