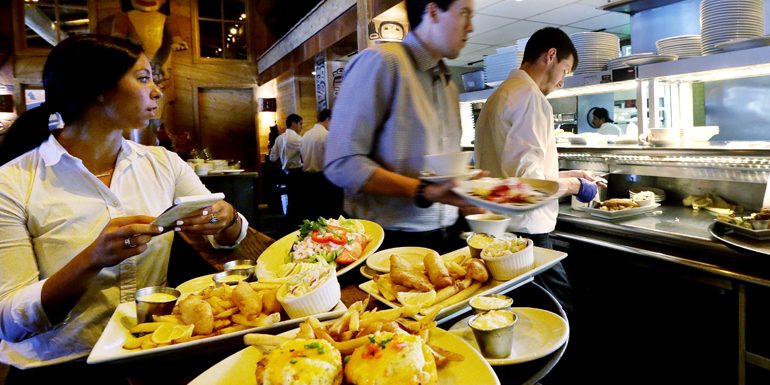 Restaurants Are Getting Teen Workers From Other Industries

Ahh the Spring season. A time when folks itching with cabin fever get to open the windows to beautiful warmer air and blooming flowers. When students are eagerly awaiting a few months off from the classroom to hit the beach and many are gearing up for the final days of their educational careers with graduation looming. In the meantime, while many are finalizing their plans at their summer homes, restaurant owners are scrambling to prepare for the busiest months of the year at the Jersey Shore. With some seasonal businesses opening their doors for the first time since September, and year-round restaurants and bars are anticipating an influx in customers, all restaurateurs have one major focus right now: finding employees.

The Jersey Shore has become one of the most visited beach areas in the country stemming from the popularity of Jenkinson’s Boardwalk in Point Pleasant Beach, Casino Pier in Seaside Heights, Six Flags Great Adventure in Jackson, Asbury Park’s musical attractions, among many other visitor favorites. But with an increase in visitors brings a need for an increase in help as well, especially for the food and beverage businesses. According to Hudson Riehle, the National Restaurant Association’s Senior Vice President of Research and Knowledge, there are currently one million job vacancies in the hospitality industry. That’s a lot of opportunities for young adults to start saving for college and learn the value of a dollar. Thankfully, not all teenagers have plans of relaxing on the sand this summer as many have been handing in applications at restaurants.

According to a report from CNBC.com, fewer retail jobs are available since the announcement of several major brand names to close their doors, so restaurateurs have been scooping up the unemployed youth. Just in 2019 alone, 4,810 stores have threatened closures including popular shopping destinations such as Gap, Victoria’s Secret, Abercrombie & Fitch, Payless, Gymboree & JCPenney. Bad news for retail associates and managers as that number will most likely climb, but good news for restaurant owners who now have a slew of prospective hires looking for work.

These closings come after the announcement of the “Raise the Wage Act of 2019,” that has sparked quite the debate in recent months. However, restaurateurs are using some tactics of their own to try to get an edge to attract young employers including promising to help pay for worker’s college funds. Taco Bell is launching so-called “hiring parties” occurring in the coming weeks to get more workers. Six hundred parties are to be held at company-owned and franchise locations across the country featuring free food, walk-in interviews and an opportunity to speak with managers and current employees. The number of teen workers has even exceeded the number of adults ages 55 and older who have jobs in restaurants, which jumped 70 percent from 2007 to 2018 says PYMNTS.com.

Many Jersey Shore restaurants have been getting the word out through “Wanted” signs, job boards, social media and other avenues in search of both short-term and long-term assistance. If you live near coastal towns and are looking for a position as a line cook, busser, dishwasher, hostess, or waiter, there’s probably an opening available for you. But hurry, because teenagers are snatching them up fast!