America’s restaurants are worth saving. The realities of the COVID-19 pandemic — which has devastated the restaurant industry and irreparably altered the lives of everyone who works in it — have forced a painful, impossibly forward-looking conversation to the front of people’s minds: How will the restaurant industry rebuild?  23 chefs, activists, restaurant owners, documentarians, and workers look into their crystal balls to envision: What would a utopian restaurant industry look like in five years?

About the resumption of indoor dining.  Gov. Phil Murphy signed Executive Order No. 183, which establishes rules for the resumption of indoor dining on Friday, Sept. 4 at 6:00 a.m., provided businesses comply with the health and safety standards issued by the Department of Health.  Under the Department of Health’s Health and Safety Standards, food or beverage establishments offering in-person service must adhere to the following protocols, among others.

For Atlantic City tourism district.  Atlantic City visitors will soon be able to enjoy alcoholic beverages on the beach, boardwalk and other outdoor properties designated as an “open container area” under a new law signed Friday by Gov. Phil Murphy. The law limits open containers to certain outdoor property located within the Atlantic City Tourism District, and the Casino Reinvestment Development Authority (CRDA) still has to authorize it.

For indoor weddings, funerals and political events. Gov. Phil Murphy, who announced steps on Monday to open up indoor dining and movie theaters, also increased the capacity limits for indoor gatherings for religious services and celebrations, weddings, funerals, memorial services, and political activities beginning this Friday.  Those will be capped at the lesser of either 25% capacity or 150 individuals — an increase from the current limit of 25% capacity with a cap of 100.

To bring customers back to restaurants.  The National Restaurant Association has released a new national advertisement meant to entice diners to come back to restaurants. The commercial, called “Sounds We Crave,” is part of the organization’s recently launched Restaurants Revival campaign and features the familiar sounds of a working restaurant: plates clinking, knives chopping, butter sizzling in a pan, and beer pouring into a glass. The advertisement asks, “doesn’t dining out sound good?” and is the first national consumer campaign ever released by the National Restaurant Association. This campaign is about reigniting the memories we cherish about dining out.

Critic, fresh off hiatus, surveys the state of his neighborhood.  The great adventure is ending for restaurateurs all over town these days, and also for chefs and line cooks and servers and possibly for the dwindling number of big-city critics, too. Survival is the issue now, not the quality of the service or your overcooked fillet. Websites that once upon a time advertised breathless news of openings in newly colonized dining neighborhoods are now filled with a steady stream of gloomy, nostalgic death notices.  There are the mom-and-pop restaurants that have had long, successful runs but whose owners have decided to throw in the towel. There are the overextended empires, like David Chang’s or Keller’s.

NYC restaurant owners worry about future.  We’re in a situation where New York City restaurants are surrounded by outdoor dining and they are locked out of it and in a massive massive financial crisis,” Executive Director NYC Hospitality Alliance Andrew Rigie said.  Both Governor Andrew Cuomo and Mayor Bill de Blasio suggested Monday that indoor dining won’t be happening in the near future.  The Decision to allow indoor dining in the city lies in the hands of the state. Governor Cuomo notes that with schools reopening and flu season just around the corner the city needs to stay extra cautious before letting restaurants operate one step further.

States Should Prepare for Possible Vaccine

By early November, C.D.C. says.  The Centers for Disease Control and Prevention has notified public health officials in all 50 states and five large cities to prepare to distribute a coronavirus vaccine to health care workers and other high-risk groups as soon as late October or early November. The new C.D.C. guidance is the latest sign of an accelerating race for a vaccine to greatly ease a pandemic that has killed more than 184,000 Americans. The documents were sent out last week, the same day that President Trump told the nation in his speech to the Republican convention that a vaccine might arrive before the end of the year.

OhWaiter launches text messaging-based ordering and payment solution.  Hospitality technology solution provider OhWaiter has launched its new text messaging platform, offering contactless and efficient communication between guests and restaurants (as well as other service-based businesses). Currently deployed in dozens of restaurants on the West Coast, the service is now available nationwide.  OhWaiter customers are provided with up to two tablets per location. When a guest makes a text messaging request, that message is sent to the provided tablet and any team member is capable of fulfilling the request. This enables both the restaurant staff and their guests to communicate seamlessly and prevent delays.

A voice for our industry.  If you are finding these now weekly bulletins informative and beneficial during this pandemic, we kindly ask that you write a brief Google review providing a vote of your appreciation.  Simply Google “Bielat Santore & Company” and when the company name appears click the button on the right to write your review or; if you don’t use Gmail, go to Google Maps, type “Bielat Santore & Company” – Allenhurst, NJ into Google Maps; scroll down and you will see an option to leave a review. 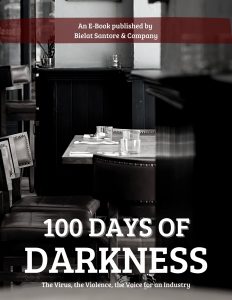 A new and exciting update.  Bielat Santore & Company’s publishes new E-Book, “100 Days of Darkness.”  The E-Book is a synopsis of events that occurred over the first 100 days of the pandemic and how our firm rallied from within to help hospitality owners and operators.

Will the devastation and loss of lives triggered by the coronavirus usher in a “Great Awakening” in America?”  While the United States of America is in desperate need of reformation, activists, anarchists and radicals are wreaking havoc in the streets demanding revolution in its place.  Something must change!  America finds itself draped in darkness. Look up America! There is a light.