To new Congress. After being introduced to both the Senate and the House in Dec. 2022, the Restaurant Revitalization Tax Credit Act is being reintroduced to the new 118th Congress by Sens. Ben Cardin (D-Md.),  Sherrod Brown (D-Ohio) and Patty Murray (D-Wash.). The legislation would create a special tax credit in 2023 for those who applied for, were eligible for, but did not receive a Restaurant Revitalization Fund grant because the U.S. Small Business Administration ran out of money. “We have not forgotten about these restaurants. They have been hurting for too long,” Senate Finance Committee chair Sen. Cardin said in a statement. “The Restaurant Revitalization Fund was a timely program that simply did not have enough funds to cover the intense demand. I’ve heard from many restaurant owners who, having missed out on these funds, used their personal retirement savings or put their homes up as collateral to keep their businesses afloat. This tax credit will help ease their burden. It will support the restaurants we love while helping to boost our local economies.”

Why the Restaurant Rent Model Needs to Change

Taking a different approach to lease negotiations. It’s a tale as old as time in the restaurant space: Margins are tight because the three-legged stool (food costs, labor and rent) is expensive. Now, all three legs just happen to be near historically high levels. What are operators to do? They can’t open without labor. They can’t function without food. So, rent tends to get kicked down the road and that has perhaps never been clearer than in the past three years amid unprecedented uncertainties. Alignable has been keeping track of rent delinquencies since the onset of the pandemic and December’s numbers were particularly staggering for independent restaurant operators, with 52% claiming they couldn’t pay their rent that month. This marked a 17% increase in delinquencies year-over-year. The hardest hit states were New York, Texas, New Jersey, Pennsylvania and Florida. Andrew Rigie, executive director of the NYC Hospitality Alliance, isn’t surprised to see his state atop the list. “We have high commercial rents, were hit so hard by the pandemic, had strict Covid-19 mandates, and way too many eligible restaurants were rejected for Restaurant Revitalization Fund grants when the money was quickly exhausted,” he said, adding that the federal government’s decision to not replenish the RRF compounded the issue. “Not to mention, many restaurants have not even gotten back to 2019 sales, so how are they even supposed to pay off rent arrears when they’re having trouble affording it month to month?”

Why Cybersecurity Should Be a Priority for Restaurateurs

Restaurants under attack. As restaurants continue to evolve and become more heavily dependent on technology, cybersecurity becomes more important than ever as well. It is essential that restaurateurs focus on protecting their establishments and the information of their patrons, or they could risk losing their customers. This loss of business can be detrimental, especially as the hospitality industry still struggles to recover after the COVID-19 pandemic. In this guide, we will discuss why restaurateurs need to take cybersecurity seriously and the steps necessary to keep customer data secure. Some restaurant owners may not believe that their establishment could be targeted by hackers, either because they think that they are a small fish in a large pond or that hackers aren’t interested in restaurants. However, the truth of the matter is that cybercriminals go wherever the data is, and when customers are paying with cards and using POS machines, then there is plenty of information for the taking. Recently, several restaurants have fallen victim to data breaches and cyber-attacks. Earlier this year, hackers attacked a restaurant in Washington and stole over $450,000 from their company accounts. The POS system has been a major issue in recent years, with many restaurants, including Applebee’s, Dunkin’, and Chipotle, getting hit with data breaches that have compromised thousands of customer records. When a restaurant falls victim to a breach, it causes countless problems.

The best companies forge ahead. Businesses are facing a whirlwind of turning points resulting from the COVID-19 pandemic and subsequent “Great Resignation” period. It’s getting harder and harder to adapt and survive, especially in the ever-changing hospitality industry, but the best companies forge ahead. Life in the trenches of a restaurant is stressful, perhaps a bit unnecessarily at times. As leaders who are focused on making our business stronger through thoughtful problem solving, we have had to take a hard look at how to meet that particular challenge.  La Vida Hospitality believes in working as smart as you play, and encourages employees to Enjoy The Ride, a tried-and-true mantra for our approach to the work-life balance.  We are keenly aware of the grind of our industry, making the need for a balanced life crucial while creating a mentality of awareness in the workplace. Although we always tried to foster a stress-free environment, we were not focused on the steps to drive it on a daily basis. Boy, did that all change in the blink of an eye. Our good-natured intent quickly became the priority of our organization as a post-COVID era had all businesses competing for team members in the same pool. Fast forward to 2022: La Vida is better organized and everyone is literally enjoying the ride. We have valued team members dedicated to the cause and we are actively investing in building the organization we always believed in.

At offices and other workplaces. The National Restaurant Association has been sued for using the proceeds to fund its lobbying. The plaintiffs want the practice stopped and reimbursement of the $15 that any employee paid for the course. Assertions that the National Restaurant Association is tricking restaurant workers into paying for lobbying to hold down their wages have escalated into a federal court case. A lawsuit filed last week seeks to block the association from using proceeds from its ServSafe food safety certification to fund the group’s advocacy efforts. Disallowing the trade organization from tapping those funds would put a severe crimp in its ability to protect and promote the industry’s political and governmental interests. The suit also seeks reimbursement of the $15 course fee for restaurant employees who had to swallow the cost rather than having the expense covered by their employers. The percentage of workers who paid the charge themselves is unknown. More than 4 million restaurant employees have undergone ServSafe training.

1 in 4 Restaurant Workers Expect to Leave Industry Within Year

Survey finds. Restaurants often deal with a restive employee base, but the pandemic and ensuing labor shortage have left an impact, according to a survey of restaurants workers in December. More than one in four (27%) of workers said they will have left the industry a year from now, according to a December survey by KURU Footwear, which polled 800 U.S. workers, 18 and older, in the food/restaurant service industry. Surveyed workers said pay (as chosen by 46% of those surveyed) was the most important contributor to job satisfaction, follow by flexibility at 20%, the KURU report found. Data from Alignable, released in December, indicated that 11% of small restaurant owners were reducing their staff size amid a growing number of layoffs and hiring freezes. That marked a 5% jump in restaurant staff reductions from November. And among restaurant owners still hiring, about 44% reported difficulties finding the right workers, the Alignable report found. The KURU survey found more than half, or 58%, of workers reported feeling happy or extremely happy about their jobs. But about 56% said they felt burned out by their jobs, and 16% were unhappy or extremely unhappy.

Pay attention to dish order and placement. Whether they’re eating at one of the best new restaurants in NYC or their favorite neighborhood diners, one thing is certain: Foodies love food. According to a Tasting Table Exclusive Survey, our readers’ favorite part of eating out at a fancy restaurant isn’t getting dressed up or enjoying a night on the town –- it’s the food. It can be exciting to sit down at a restaurant for the first time and be presented with a new array of dishes to discover. But, before you order, give that menu a second look. Crafty menu engineering can increase restaurant profits by as much as 15%, reports TouchBistro, and restaurants may be tricking you into ordering expensive items. That menu might be more than just a list of meals — keep an eye on the layout. Restaurants will often list the most expensive offering toward the top of the menu, says Mental Floss, making the other dishes seem more reasonable by comparison. Per The Guardian, those pricey dishes might also be listed beside the dishes that generate the highest profit for restaurants to encourage folks to choose those. For instance, if the chef gets a killer deal on yellowfin tuna from their fishmonger that week, it’s getting listed for $10 next to the $15 toro sashimi. But, at some restaurants, the menu designs are even more calculated than that.

Starbucks is doubling down on coffee delivery. The coffee giant is expanding its deal with DoorDash nationwide and expects delivery to be available in all 50 states by March. You will soon be able to DoorDash that Venti Iced Americano with two pumps of caramel and cream foam. Starbucks is making a bigger push into delivery. The Seattle-based coffee giant on Tuesday said it would make its menu available on DoorDash in all 50 states by March of this year. The company launched delivery in Northern California, Texas, Georgia, Florida and other select markets on Tuesday. That follows a successful pilot test in Atlanta, Houston and Sacramento and market expansion into Seattle, Portland and New York City last year.

To retain the best restaurant GMs, automate back-office tasks. n the restaurant industry, adapting quickly to new circumstances has always been essential. Labor shortages and supply chain issues have tested restaurants for the last couple of years—and with post-pandemic crowds returning to on-premise dining in greater numbers, many operators have been tasked with an extended period of doing more with less.  The Bureau of Labor Statistics reported that December 2022 marked the 24th consecutive month of job increases in the restaurant and bar segment, but employment in the overall leisure and hospitality industry remains 5.5 percent below pre-pandemic levels. It’s clear that many of today’s challenges aren’t going away anytime soon, and restaurants are adapting. 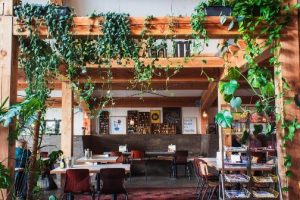 Photo shown to illustrate “BYOB restaurant” only.  Not actual representation