The following is an excerpt from Governor Murphy’s State of the State address. I am greatly aware that some of, if not the, hardest hit businesses from the pandemic were our restaurants. And few were harder hit than the small neighborhood establishments – many, if not most, family-owned – that couldn’t get a liquor license that is so critical to maintaining a healthy profit margin. There’s no other way to put it – our liquor licensing regime is antiquated and confusing. We rely on a foundation of rules written in the days immediately after Prohibition to govern a 21st century economy. That makes no sense. It makes no sense to restaurateurs like Ehren Ryan, the chef/owner – along with his wife, Nadine – of Millburn’s Common Lot, where a liquor license can ensure the stability of his establishment. Ehren is with us today. And so, I ask for your partnership in rewriting our liquor license laws to make them not just modern, but fair. The old rules have purposely created market scarcity and driven up costs to the point where a liquor license can draw seven figures. For many small, independent restaurateurs – folks like Ehren, and many others like him in other communities, and especially those in Black and Brown communities where access to capital has historically been limited – that’s just too high a price to pay. Expanding the number of available liquor licenses will not only help keep our favorite local restaurants healthy, it will also help keep our economy healthy. This won’t be easy, but it will be worth it. We project that overhauling our liquor license regime will create upwards of 10,000 jobs annually and, over the next 10 years, generate up to $10 billion in new economic activity and $1 billion in new state and local revenues. And here is how we can do it. Right now, the number of liquor licenses allowed to be issued by any local government is one for every 3,000 residents. I propose that over the next few years, we gradually relax this requirement and expand the number of available licenses until the restriction is eliminated in its entirety and the market can work freely. Meanwhile, we can maintain the local control that is so critical in making sure our downtowns retain the character that makes them so special. Now, I fully recognize that some restaurants have made significant up-front investments to obtain their current licenses. We must be fair to them and I propose a targeted tax credit to support them as the supply of licenses grows. I further ask you to join me in removing outdated licensing and operating restrictions on our craft breweries, distilleries, and wineries, which are seeing nothing short of a true renaissance.

The State of Restaurants in 2023

Customers appear willing to spend on food, but it has to satisfy the value equation. In the years leading up to the pandemic, restaurant bankruptcies had become a recurrent headline. The count of U.S. restaurants and bars increased at a 2.2 and 2.5 percent compounded annual growth rate (CAGR) over the three and five years preceding 2020, respectively, according to Rabobank. Put into context, roughly 45,000 new restaurants—net of permanent closures—opened across three years, more than in any other comparable period over the last 25-plus. It created a dynamic some believed set a course correction into motion. One expert told FSR the industry could be headed for a 15 percent reduction, or the elimination of 100,000 restaurant sites. This oversaturation was also responsible, in the view of certain pundits, for widespread traffic declines and a middle ground where restaurant operators were getting stuck between two viable splits—retail-focused and convenience-driven restaurants, and those who catered to experience. The rate of expansion accelerated meaningfully, from growth of 1.7 to 1.8 percent in the 20 years prior to COVID. Operators raced to take advantage of decades-low unemployment levels, rising discretionary incomes, favorable demographics, and multiplying delivery and ordering options, which totaled more than a third of overall foodservice growth from 2017–2020, per Rabobank. What resulted could be described as “zero-sum” field that benefitted some over others.

Restaurants Expect 2023 to Be All About Controlling Costs

Inflation putting a stronger spotlight on preserving margins. So much for glad tidings in the New Year. Only 16% of the nation’s restaurants expect profits to increase in 2023, with 50% bracing to make less money than they did last year because of soaring expenses, according to new research. A survey by the National Restaurant Association also designated a third inflationary culprit to add to the Big 2 of labor and food costs: energy expenses. The canvass revealed that operators are adjusting to the tougher cost environment in dramatic fashion. More than a third, for instance, have delayed expansion, and 13% have stopped using third-party delivery services, a notoriously high expense. The major takeaway of the survey, according to the association, is that operators are mildly optimistic about 2023 sales but are braced for significant pressure on margins. Roughly 9 out of 10 operator-respondents described soaring food and labor costs as significant challenges for the next 12 months. Almost two-thirds (63%) designated energy and utility costs as a deep concern. Considering the total cost picture, about a third (34%) of restaurants expect profits to flatten this year, and half anticipate a drop in income. Still, “The restaurant industry is ending the year in an environment that’s the most typical since 2019,” Hudson Riehle, SVP of research for the National Restaurant Association, said in a statement.

In 2023. The past three years have been disruptive and unpredictable. Climate change has been destroying traditional farming. Pandemic-related backlogs—combined with factors like the Russian-Ukrainian war—have led to ongoing supply chain interruptions. Product shortages have forced restaurants to pivot, changing their menu or using substitute ingredients. And when products are available, inflation at a 40-year high means they’re significantly more expensive. Labor shortages have left restaurants scrambling. And, of course, we navigated a multi-year global pandemic. After an extraordinarily difficult few years, I’m cautiously optimistic that things will improve in 2023. Technology will be essential to innovation and improvements in the new year. Tech has morphed from “nice to have” to an absolute necessity for restaurants, as we’ll use tech to elevate the way we train, audit, manage our suppliers, and more moving forward. Thankfully, today’s tech solutions are more affordable, accessible, intuitive, and user-friendly, allowing brands of all sizes to leverage these tools. Here are my seven predictions on how tech will drive positive changes in the coming year.

The Next Wave of On-Demand Restaurant Delivery

The dust seems to have settled on the shiny new toy of the restaurant industry: the ghost kitchen. Benefits to this model were initially touted as lower real estate and operational costs versus traditional restaurants, zero front of the house costs, flexibility of menu, brand, and pricing, and an opportunity to attract a new clientele via third-party delivery apps. And at the outset, those seemed to be very compelling reasons to “startup” a ghost kitchen. Many startups across varying industries, eager to disrupt, often make a lot of mistakes out of the gate, the restaurant space is no different, however, here, the main blunder made by some of these startups was not understanding the business of hospitality from the get-go. Ask any successful restaurant veteran what the secret of success is for any profitable and long-standing brand, and they’ll all say the same thing—consistency, and a focus on the customer. By focusing too much on operational ease and efficiency, many ghost kitchen startups failed to convert orders into repeat business, misspent capital, underestimated the needs of diners, and cast a dark shadow over partners that dared to risk their brand reputation to unproven operators.

Seventy-eight percent of small businesses that run ads on TikTok have already realized a positive ROI. TikTok marketing yields undeniable power, especially with Gen Z as it helps mitigate choice paralysis by giving users immersive, vertical videos that take them inside a business instantly, rather than sifting through text-heavy sites. Given its success rate, 52 percent of TikTok marketers surveyed plan to spend more money on the platform in 2023. And only 18 percent of businesses not currently using it say they have concerns over its data practices. “In response to Gen Z’s preference for TikTok as a search engine over Google Maps, Google plans to launch augmented search functions to rival TikTok reviews’ immersive, authentic qualities.” said Molly Burke, senior retail analyst at Capterra. “Users like TikTok because its seemingly endless content feels authentic and unfussy videos made by real people, for real people. Creating ads that capture the candid nature of organic TikTok content helps businesses blend in and profit.” More than three-quarters of businesses that use TikTok post organic content, while less than two-thirds run ads on the platform (some only use TikTok to discover trends or keep an eye on their competitors). Among businesses that post both organic and sponsored content, 72 percent say organic TikTok content is extremely valuable to their company’s overall marketing performance, while 55 percent say the same for ads.

The industry accounted for roughly 1 of 9 jobs that were created. Eating and drinking places added 26,300 jobs during December as total U.S. hiring for the month hit 223,000, hammering down the national unemployment rate to 3.5%, new government data show. The hiring by restaurants and bars marks a deceleration from the pace of November, when the sector added 59,400 positions, according to the latest monthly jobs report from the U.S. Bureau of Labor Statistics. With December’s addition, total employment within eating and drinking places rose to just under 12 million, still 450,400 positions short of the sector’s total workforce in February 2020. Still, the sector generated about 1 of every 9 jobs that were created nationwide during December. The BLS information was released a day after the National Restaurant Association revealed that 19% of the nation’s restaurants are deferring recruitment because of prevailing economic conditions. That data was based on a survey conducted in November.

Biden Administration Gas Stove Ban Idea Leaves NYC Restaurants Feeling Burned. On Monday, the US Consumer Product Safety Commission said it was considering a nationwide ban on gas stoves, which are currently used in 37% of US households and 76% of US restaurants, according to Consumer Reports and the National Restaurant Association. The safety commission cited recent reports that gas stoves emit unsafe levels of pollutants such as nitrogen dioxide and carbon monoxide and have been linked to cancers, respiratory illnesses and cardiovascular problems. But the city’s chefs and restaurateurs are fuming at the possibility of a ban and the devastating effect it could have on the health of their businesses.

Some restaurant workers could see big wage growth in 2023. More than half of U.S. states will hike their minimum wage this year, but some restaurant workers could see even bigger gains in 2023. California’s state minimum wage rose to $15.50 an hour on Jan. 1, but depending on the results of an ongoing court battle, fast-food workers in the state could find themselves earning as much as $22 an hour this year. And industry lobbyists say similar legislation could pass in states like New York and Michigan. Higher pay has been bars’ and eateries’ primary solution to attracting enough workers to meet demand. The restaurant industry was already struggling with a labor crunch before the pandemic turned the problem into a full-blown crisis. 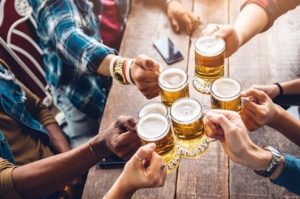