Inflation leading to recession. Food prices will keep climbing – with no end in sight — as inflation continues to take hold of the US economy, some of the nation’s leading food suppliers and restaurant chains said. Kraft Heinz, Tyson and Campbell Soup all warned they would raise prices on certain products due to skyrocketing costs for labor, packaging, ingredients and transportation, according to a report in The Wall Street Journal. Fast-food joints like McDonald’s, Shake Shack and Cracker Barrel have also signaled feeling the pinch that in part has been passed onto consumers. “Inflation is real, and it’s not going to get any better any time soon in the restaurant business,” Shake Shack CEO Randy Garutti said at an investor conference Tuesday, the report said. The Labor Department said Friday that grocery store prices had spiked 11.9% in May over the last years, while those at restaurants and other food venues jumped $7.4%, marking the biggest increase in more than four decades for both.

To curb inflation.  There’s a chance the Federal Reserve could take extreme action to curb rampant inflation — including hiking interest rates by as much as a full percentage point when the central bank meets for two days beginning on Tuesday, according to analysts. As of last week, the consensus on Wall Street had been that the Fed would increase rates by 50 basis points, or 0.5%. But on Monday, multiple news outlets including the Wall Street Journal, Bloomberg and CNBC reported there’s a distinct possibility that the Fed boosts interest rates by 75 basis points. As of Tuesday morning, however, a fresh debate was brewing as to whether the central bank may go even further than that. Steven Englander, a top analyst at Standard Chartered Bank, told Bloomberg there was a 10% chance that Powell would have a “Volcker moment” and opt for the more extreme 100-basis-point hike. “The Fed’s trying to erase any perception that they’re behind the curve,” Englander said. “Fifty was the big round number six months ago. Meanwhile, 75 is a very middling type of hike. So the Fed might say: ‘Look, if we want to show commitment, let’s just do 100.’”

What’s cooking up the global disruptions? It’s safe to say we’re all getting a little weary of hearing the words ‘supply chain’. Despite that, they’re the words on everyone’s lips, which have transcended from industry niche to everyday conversation. Why? The current issues in supply chains are global, affecting all industries and having very real and lasting impacts on businesses and consumers. There are multiple reasons for supply chain slowdowns, including labor, transportation and container shortages – and inflation-fueled cost increases. However, the current supply chain issues became truly out of control when another hot topic took hold: the pandemic. Industries were affected disproportionately. Demand for products and services in certain sectors skyrocketed, while it plummeted in others. Across the food & beverage industry, the grocery sector grew as consumers settled into cooking at home, rediscovering baking and relying on comfort foods. That’s not to mention the surge in panic buying causing the Bullwhip Effect (Forrester Effect) to take hold. All this meant forecast planning errors increased by 59% from pre-pandemic levels, according to a study by E2open. Whereas the supply needs for dine-in restaurants all but evaporated.

Menu Prices Continued Soaring in May

The highest jump in 41 years. Menu prices rose at an accelerating rate in May, with customers typically paying 7.4% more for an item than they did a year ago, according to new government figures. The year-over-year increase was the sharpest upswing in restaurant prices since 1981, the U.S. Bureau of Labor Statistics (BLS) noted in updating the Consumer Price Index (CPI). The rise was particularly sharp for full-service establishments, with charges running 9% above year-ago levels. Prices at limited-service restaurants, where labor expenses are usually lower, increased year to year by 7.3%. The CPI for food prepared away from home ticked upward by 0.7% in May, an acceleration from the 0.6% clocked in April. Consumers had not seen a rise that sharp since January. In February and March, menu prices rose month-to-month by 0.4% and 0.3%, respectively. The uptick was particularly pronounced for the limited-service sector, whose prices rose 0.7% after a 0.3% in April. Yet the upswing was less pronounced than it was for full-service restaurants, who raised prices by 0.8%.

The Hidden Costs of Your Data Blindspot

Improving access to reliable, actionable cost data and advanced analytics. It’s the eleventh hour for many independent restaurateurs. Beaten up by COVID closures, record-high inflation, and persistent staffing shortages, thousands of dedicated owners are just an invoice or two away from turning off the lights permanently. At the best of times, many restaurants are scraping by month to month with very little or no cushion to endure repeated setbacks. So when things go wrong, many businesses can’t survive. According to the Independent Restaurant Coalition, more than half of independent restaurants and bars that have yet to receive federal grants anticipate they will close within the next six months. Many pegged their hopes on new Restaurant Revitalization Funding. But, even if Congress had agreed, more federal money wouldn’t change how the foodservice industry works or protect independent restaurants from the next unforeseen challenge. To change the industry and move more restaurants from “just getting by” to thriving, owners and managers must address the core problems: profitability and cash flow. Central to fixing these systemic vulnerabilities is improving access to reliable, actionable cost data and advanced analytics.

Best Practices to Prevent Theft in Your Restaurant

Restaurant theft is expensive. One study found that internal employee theft is responsible for 75 percent of inventory shortages and about 4 percent of restaurant sales. That totals between $3 and $6 billion annually. There are all kinds of different types of restaurant theft, ranging from food and inventory, theft at the register and checkout counter, external grease theft, time theft and employee product theft. It’s also more prevalent than some restaurant owners and managers might want to believe. The same study found that About 75 percent of employees steal from their workplace at least once, if not repeatedly. That means, in a vacuum, three out of every four of your employees could potentially engage in some form of theft from your business. That hurts your bottom line and is regressive to the rest of your restaurant operation. So, how can you put safeguards in place to help deter restaurant and employee theft? Here are a few options to consider. Theft is a rampant issue within restaurants but implementing these safety measures and practices will go a long way in ensuring that your business is not a victim of restaurant theft.

When Are Price Increases Warranted?

Supply shortages and cost increases aren’t going away soon. So many events have occurred over the past couple of years that they have put all industries in a see-saw balancing act weekly. Situations like a cargo ship stuck in a canal, two countries at war, COVID’s continued resurgence, and widespread labor shortages have caused so much disruption across the board that we’ve all needed to get very creative in our operations to navigate uncontrollable factors. With inflation touching a 40-year high, many in the hospitality industry have been re-evaluating how their restaurants are operating. While the industry has seen steady price increases for more than a year, consumers didn’t really become aware of this until around the beginning of 2022, as they saw some of the most significant increases occur during this time. In restaurants, many of us have witnessed food costs on particular menu items increase by 20-30 percent in a relatively short time. For example, we have seen noticeable increases in the seafood markets for a year now, with not much relief. Some areas like produce and beef have gone up and down, but seafood has remained on an upward trend for more than a year.

The future is almost here. In late May, the National Restaurant Association held its first trade show since 2019 in Chicago. It was so great to see old friends, make new friends and see how far the industry has advanced since the last show. I have been going to the National Restaurant Association show since I was 21, and I have never seen the industry innovate so quickly as I did this year. There are such great products, incredible equipment and new services being offered to the industry. However, if you were to ask me to wrap up the show in a single word it would be ROBOTS!

How to protect employees during the current heat wave. With nearly a third of the nation sweltering through a dangerous and historic heat wave, the U.S. Occupational Health & Safety Administration (OSHA) is urging restaurateurs and other employers to follow its revised guidelines for protecting workers from heat illness. The workplace safety watchdog is reminding all employers that they have a responsibility to shield their staffs. It recommends that they follow a combination of the agency’s four common sense practices and precautions tailored to a workplace, such as a hot kitchen. The fundamentals, it says, are these four steps: 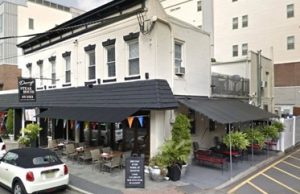 For over 50 years, Danny’s Steakhouse on the corner of Bridge Avenue and West Front Street, has been a cornerstone of the community and an integral part of Red Bank history. As one of Red Bank’s oldest eateries, Danny Steakhouse is the place where thousands have met for lunch, dinner, cocktails, music and friendship over the years. It is hard to imagine Red Bank without Danny Murphy or his restaurant. But all good things come to and so does this one.  The restaurant has been sold according to Barry Bielat of Bielat Santore & Company, Allenhurst, New Jersey, the broker for the sale.

Considering the sale of your existing restaurant (including land, building and liquor license)?  Call Bielat Santore & Company first.  The restaurant companies we are currently working with are internally funded, have established banking relationships, are corporately managed and can move expeditiously toward closing on the right locations.

A voice for our industry. If you are finding these weekly bulletins informative and beneficial during this pandemic, we kindly ask that you write a brief Google review providing a vote of your appreciation.  Simply Google “Bielat Santore & Company” and when the company name appears click the button on the right to write your review or if you don’t use Gmail, go to Google Maps, type “Bielat Santore & Company” – Allenhurst, NJ into Google Maps; scroll down and you will see an option to leave a review.