Excluded from the appropriation bills that will likely pass to keep the government funded.  Even as COVID-19 mandates fade and Long Islanders seek to return to their pre-pandemic routines, the region’s economic comeback will take time.  Long Island’s restaurants and catering halls, unsurprisingly, still need help.  Many people haven’t returned to their offices; some may never come back. That means fewer employees seeking lunch at the nearby sandwich shop and fewer catering calls for large gatherings. As inflation worries take hold, prices of food and other goods continue to rise. And the more gas prices and other costs increase, Long Islanders will have less disposable income to spend on dinners out.   For restaurants still trying to emerge from the lows of the pandemic, this is a recipe for trouble. That’s why Congress must replenish the federal Restaurant Revitalization Fund. Lobbyists are rightly seeking an additional $48 billion for the fund. It’s deeply disappointing that it seems the replenishment won’t happen in this week’s omnibus budget bill, thanks to unfortunate Republican opposition. Majority Leader Chuck Schumer should continue to prioritize it, Republicans should come on board, and together they must find a way to get it done.

Consumers still aren’t pushing back.  Restaurant consumers in February were once again hit with menu price inflation not seen in years.  The food away from home index rose 6.8 percent over last year, which was the largest 12-month increase since December 1981. Limited-service meals rose 8 percent year-over-year, while full-service menu prices grew 7.5 percent.  Probably one of the most strategically important things a restauranteur needs to do today is to look out six months and 12 months to start making plans and changes now,” Rivers said. “Otherwise, if you manage your business from a reactionary perspective like we used to for years you’re going to get caught. Because the landslide is too steep at the moment.”  In the U.S. overall, inflation rose 7.9 percent in February, setting the highest mark since 1982.  Here’s a look at how menu price inflation has trended in the past six months (year-over-year comparisons):

How Restaurants Can Manage Cash in a Digital World

Cash isn’t going anywhere—but restaurants need a better solution to handle it.  According to the Diary of Consumer Payment Choice, an annual research report conducted by the Federal Reserve, cash accounts for 19 percent of all payments in the U.S. During the height of the pandemic, the amount of cash carried by consumers increased by $20, to an average of $74. Cash is especially popular for small-value transactions, representing nearly half of all payments under $10.  Initially motivated by customer convenience—but spurred into high gear during the pandemic and the resulting labor shortage—more businesses are offering cashless methods of payment. Self-service kiosks, online ordering through third-party apps, and payments through loyalty apps are increasingly common, and that’s a good thing for both consumers and restaurants. It’s helping operators streamline operations and manage labor, while offering a safe and convenient experience for health-conscious customers. But there’s more to the story than convenience and operational efficiency.  Not everyone has the ability to pay digitally. More than 26 percent of the U.S. population is unbanked or underbanked, which means they either don’t have a bank at all or don’t have access to electronic payment options such as debit or credit cards. That means restaurants that don’t accept cash are locking themselves out of almost one fifth of the consumer market.

Thanks to COVID insanity.  City restaurants opened Monday to all diners, vaxxed or no, for the first time since August. Let’s all hope the industry can recover rapidly from the devastation wrought by COVID craziness.  Don’t be fooled by the fact that you still can’t get a table at Masa. Outside the glitziest spots, the picture for eateries is ugly.  Table reservations were down 53.2% citywide since 2020. In January, that number hit a crushing 72%. But the real bad news can be found in new data from the state comptroller’s office, which shows that from the end of 2019 to the end of 2021, employment in New York City’s restaurant sector plummeted 25.4% — about 78,000 jobs lost.  That represents a huge number of closed eateries, and many of those that survived are burdened by huge debt.  That 25.4% collapse compares to a 6.3% decline across all city private-sector employment — and a national restaurant job drop of just 1.6%. That’s right: NYC restaurants got hit 15 times as hard as the US average.

Stiffed by Washington.  New York City’s restaurants remain starved for diners following the end of the vaccine mandate Monday, the last of the pandemic restrictions that decimated Gotham’s world-famous dining scene.  Citywide table reservations were down 53.2 percent on Monday, the first day since August they were open to all diners, compared with the same date in 2020, according to OpenTable.  “Restaurants feel like they had been singled out by countless mandates that were confusing, didn’t make sense and unfairly targeted the industry,” said Andrew Rigie, executive director of the NYC Hospitality Alliance. “There is still a very long road to recovery.”  Only Seattle (-54.0%) and San Francisco (-56.9%) were at lower dining capacity than New York City. Seattle’s restaurant vaccine mandate ended March 1. San Francisco is still enforcing the policy.”  “We are beyond disappointed that this massive government funding proposal ignores the needs of 177,300 neighborhood restaurants and bars impacted by the pandemic,” the Independent Restaurant Coalition said this week.

Away from restaurants’ sites.  Google is facing a lawsuit from a Florida restaurant chain owner that accuses the company of directing users to “unauthorized” Google-branded food ordering webpages, where it uses restaurants names “without their approval,” as first reported by Ars Technica.  A copy of the lawsuit alleges Google employs “bait-and-switch” tactics by placing its “Order Online” button at the top of restaurants’ profile panels on the search engine. The large blue button redirects users to a food.google.com page where they can select items from a restaurant’s menu and then place an order through a variety of third-party services, like Postmates, DoorDash, and UberEats — not through the restaurant itself. These services take a commission from participating restaurants, which, for example, ranges anywhere from 15 to 30 percent with UberEats.  The lawsuit claims that Google “prominently features” restaurants’ names on its ordering pages with the alleged goal of “deliberately confusing consumers into entering and interacting with its websites.” If a customer places an order through this page using a third-party service, the restaurant gets charged a fee, and the lawsuit alleges Google gets “a cut-of-the-action.”.

How Instant Access to Wages Can Meet the Needs

Of a changing restaurant workforce.  It’s no secret to anyone involved in the restaurant business – or anyone that’s even stepped foot in one these past couple of years – that the industry is facing a staffing crunch of unprecedented proportions.  With more than one million baby boomers retiring from the workforce in 2020, coupled with the four million Americans that have voluntarily left the workforce, there are nearly 11 million jobs that are still in need of being filled, according to the U.S. Bureau of Labor Statistics.  But even before the industry was in the throes of the COVID crisis, a record 70 percent of businesses in the U.S. reported a talent shortage, a stark contrast to the 32 percent of businesses who reported this only five years earlier. The labor shortage, the most acute since 1968, has employers competing for workers of all backgrounds. Ballooning job openings in fields such as hospitality, transportation and manufacturing, has ultimately given workers the upper hand.  So how can employers attract and ultimately retain talent to keep their businesses running? The answer: financial stability and flexibility.

Regret their exit.  Nearly 3 in 4 say their next job didn’t live up to expectations, and almost half indicate they’ll try to get their old jobs back.  A majority of the restaurant workers who quit during what’s been dubbed The Great Resignation likely regretted the decision after they started their next job, new research suggests.  A survey by the job-finding website TheMuse.com shows that 72% of workers who walked away from their positions during the pandemic found their next job or employer failed to meet their expectations. That proportion applies to employees across all industries, including restaurants.  The researchers dubbed the phenomenon Shift Shock.  Nearly a third (29%) of the acknowledged Shift Shock victims said their disappointment extended both to the new position and the company they joined. Roughly 2 of 5 (41%) indicated they’d give the new gigs two to six months before doing something about the job.  Nearly half (48%) said they’d try to get their old jobs back.

Lobster price shock hits restaurants.  It’s almost embarrassing!  Lobster prices have soared so much that restaurants are either giving their customers sticker shock or taking it off the menu entirely.  Why it matters: The lobster price shock isn’t just a supply problem or just a demand problem. It reflects both — and is a microcosm of the U.S. economy. By the numbers: Maine lobstermen were able to sell their catch straight off the boat for $6.71 a pound in 2021, according to the Maine Department of Marine Resources. That was up 59% over the pandemic-depressed 2020 level — and up 39% over 2019.  That price increase coincided with rising supply — the problem was just that supply didn’t rise enough to keep up with high demand.

Looking for a career transition? Read this first.  You have decided it is time to look for a new job (or someone else has decided that for you) and you’ve stepped into the Great Resignation. How you approach looking for that new role can impact your success rate. Here is a plan you can use while you look for what is next in 2022.  This plan will help you reflect, renew and organize your approach. Because it is always easier to remember steps in acronym form, this plan is called “I RISE” as a reminder that you are rising in your career. Here is what it stands for: 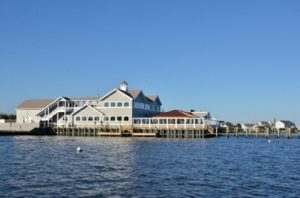 The Water’s Edge, 11 Whitecap Way, Berkeley Township, New Jersey was just sold to the regional restaurant company B2 Bistro + Bar, according to Bielat, the broker for the sale.  Stephen Valentine, managing partner at B2 Bistro + Bar said, “we will be building a premier destination-style restaurant which will be open 365 days a year. The community is fantastic down here. This venue will have something for everyone,” Valentine says. B2 Bistro’s menu includes American and Mediterranean fare, including fresh seafood, burgers, steaks, wood-fired pizza, sushi and always the best craft beers on tap. Their other restaurants are in Red Bank, Point Pleasant Beach, North Brunswick, Toms River, and Reading, Pennsylvania.

Considering the sale of your existing restaurant (including land, building and liquor license)?  Call Bielat Santore & Company first.  The restaurant companies we are currently working with are internally funded, have established banking relationships, are corporately managed and can move expeditiously toward closing on the right locations.