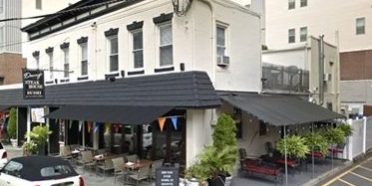 RED BANK:  For over 50 years, Danny’s Steakhouse on the corner of Bridge Avenue and West Front Street, has been a cornerstone of the community and an integral part of Red Bank history. As one of Red Bank’s oldest eateries, Danny Steakhouse is the place where thousands have met for lunch, dinner, cocktails, music and friendship over the years. It is hard to imagine Red Bank without Danny Murphy or his restaurant. But all good things come to and so does this one.  The restaurant has been sold according to Barry Bielat of Bielat Santore & Company, Allenhurst, New Jersey, the broker for the sale.

Danny’s has undergone several name and concept changes over its 50+ year run. It began in 1969, when proprietor Danny Murphy opened a local pizzeria. In 1970, the name was changed to Danny’s Italian Restaurant, which remained in place for the next 25 years. Thanks to his highly visible presence, his outgoing nature and his true interest in hearing what people were thinking, Danny garnered a loyal following. In 1995, Danny expanded his menu, adding fine-quality, dry-aged steaks, fresh seafood and sushi, and the name was again changed to Danny’s Steakhouse and Sushi Bar. Throughout over five decades, Danny has never been afraid to try new things, new menu items, specials and promotions, all to accommodate his loyal clientele.

The decision to sell had been emerging for a few years. After battling cancer and multiple joint replacements, Danny could no longer do physically what he used to.  In addition, the physical plant, the building itself needed to undergo a major overhaul.  The new owners, a group that owns 18 eateries throughout New York and New Jersey, intend to update the facility and the concept.  In the interim, they will continue to operate as Danny’s Steakhouse until such time when all the plans and permits are in place.

Danny’s is open at 4:00 pm – six days a week (closed on Monday’s). Drop in a be a part of what is happening next on Bridge Avenue. A change is coming… nonetheless, old soldiers never die, they just fade away!