The second interview of the series revival checks in with renowned chef and restaurateur, David Burke 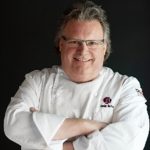 ALLENHURST, NJ: With warmer weather approaching and the potential end of the Covid-19 pandemic nearing, New Jersey business owners are hopeful for brighter days ahead. But since Governor Phil Murphy mandated state-wide closures on non-essential businesses last year, restaurateurs have struggled to keep up – and celebrity chef and restaurateur David Burke is no exception.

Following the initial shutdown in March 2020, Richard Santore, Vice President of Bielat Santore & Company sat down with Burke to see how his businesses were faring from the unexpected closures in one of the first “Restaurant Rap” interviews. In a new revival series, ‘How Ya Doin?’, Burke provides an update on all nineteen of his restaurants, including several new ventures.

With over a dozen restaurants operating all over the world, the renowned chef admits that things have not been easy. Forced to close four prominent New York City locations, Burke’s confidence that the city will make a comeback anytime soon is dwindling. “I remain optimistic, but not as much for New York City as I do for New Jersey,” said Burke. “I think New York City is going to take some time to get back on its feet.” Despite the setbacks, the New Jersey native used the unprecedented time to open several new restaurants in the Garden State including Belmar Kitchen by David Burke in Belmar; Red Horse by David Burke in Rumson; and Orchard Park by David Burke in East Brunswick. Other recent openings outside of the tri-state area include: Red Salt by David Burke in Charlotte, North Carolina; and David Burke KSA in Riyadh, Saudi Arabia.

But just like other restaurateurs, the seasoned chef has faced his share of challenges over the last year. With varying capacity limits and restrictions at each of his restaurant locations, Burke had to make many adjustments to his successful business model by offering paperless menus, masks for employees, six feet separation between tables, reservations, take-out, and delivery services, as well as installing plexiglass screens to ensure guest’s safety. “I’m hoping that we get to 75 [percent capacity] by mid-June,” said Burke referring to New Jersey’s current capacity restrictions limited to 50 percent indoors. “With the [warmer] weather and the vaccine together, I think it’s going to be a great summer as long as we stay the course.” In anticipation for the summer, Burke equipped all his restaurants with outdoor dining space, except for the Rumson, New Jersey location, which may be offering outdoor seating soon. “I think we’re going to have a good summer,” said Burke.

Grateful for the stimulus checks that were issued to help business owners stay afloat, Burke agrees that the outcome may have been different without them. “There’s no way we would have survived without the [government] funding,” said Burke. “That PPP (Paycheck Protection Program) money allowed us to stay open and not lose our whole staff.” Retaining employees has been an ongoing issue for many businesses as the pandemic provided the opportunity for people to “stop and smell the roses and see what really matters,” as Burke puts it. But for restaurant owners, it has only fueled the fire beneath an already bustling industry. “The funny thing about the restaurant business is when you’re busy, you’ve got to work hard and when you’re not busy, you’ve got to work harder,” said Burke.