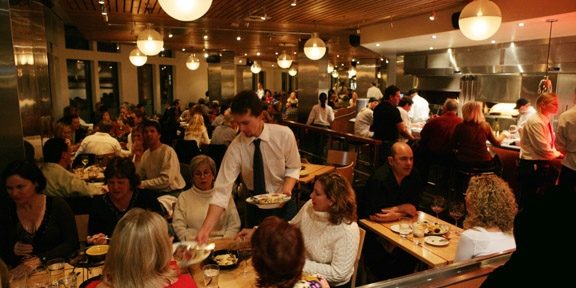 Full-service restaurants, especially located in large cities where there is heavy competition, are proving that late-night hours may be the key to luring a whole new layer of business.

There’s something about being able to walk into a restaurant after hours and be waited on as though it is the middle of the afternoon that is appealing to many diners. Not only are you presented a warm meal that is not served in a plastic to-go container, but no one is rushing you out the door when the clock strikes 2:00 am. While this is usually the final closing time for many bars and some restaurants that dare to stay open that late, knowing that there is a 24-hour eatery nearby, or at least a place open well into the night, that caters to customers with varying hunger schedules is a plus. The all-hours service was primarily a popular concept within the diner industry where extensive menus offered anything a customer could possibly crave morning, noon and night. But full-service restaurants, especially located in large cities where there is heavy competition, are proving that late-night hours may be the key to luring a whole new layer of business.

According to Food Newsfeed, 53 percent of young Americans ages 18-24 said that they would be more inclined to dine out if restaurants extended their hours. Big cities like Chicago, Dallas and New York City have tested this theory witnessing a packed dining room of patrons looking for a late-night bite well after 1:00 am. And this service is beyond the 24-hour college dining scene where students binge on disco fries during finals week, but offers a full-course dining experience. People’s only option no longer is indulging in a Big Mac at the nearest McDonalds when their stomachs rumbled past the allotted restaurant serving time, but they can actually get a full-fledged meal. Other chain restaurants we’re usually drawn to are Dunkin, IHOP, Perkins, Denny’s and Waffle House whose neon signs never seem to flick off after certain hours.

Not only are late-night hours appealing for those 18-24 year-old nocturnal diners, but also for those who work on opposite schedules than the rest of the world. For many people, their work hours include the graveyard shift, or overnight travel where it may be difficult to consume a dinner that was not purchased in the drive-thru lane. The convenience of having somewhere to eat during these odd hours is beneficial for those frequently on the clock at these times. In New Jersey, some of the go-to spots include: White Mana, Jersey City; Pompton Queen Diner, Pompton Plains; Inkwell Coffee House, Long Branch; Tops Diner, East Newark.

So what types of meals are these restaurants serving in the wee hours of the night? That depends on the clientele. Food Newsfeed reports that late-night menus should be centered around variety, value, quality and what fits your communities needs in the dark-hours. So pretty much, give the people what they want! Some restaurants have found that more old-school choices such as milkshakes and house-made pop-tarts are most frequently ordered. Many people love the breakfast for dinner – err late night snack option. And some prefer healthier selections like salads with grilled chicken or flatbread plates. In short, feel out what menu items customers are mainly gravitating towards and then go with that.

Catering to the night-owls of the city may seem like a major change to your business, as it does mean additional hours for employees and an increase in inventory, but it could also be very rewarding. Not only does it provide an opportunity for a constant revolving door of customers, it also welcomes new clientele, proving that the world does not stop moving by the signal of the clock. Study the area and see if there is a need for a late-night eatery and your restaurant may become the new after-hours hotspot in town.